When Employees are Leadership Resistant Be Irresistible!

Some Employees Seem Immune to Leadership

It shows up in various ways. Some employees resist your leadership in a silent unspectacular way. They simply avoid contacting or engaging with you. Others are more openly rebellious and challenge you in various ways.

The Reasons May Vary

There is no single underlying reason why someone is leadership resistant. In fact there can be many reasons:

All of these are quite common reasons for people to put up various forms of resistance to accepting your leadership.

How it Appears May Differ

Just like the motives to resist a leader can be many, so can the appearances vary greatly.

You Have to Deal With It

No matter what the reason and how it appears when someone on your team is resisting your leadership, you have to deal with it. You have to dissolve it and eliminate its impact in the day-to-day interaction with you and with other team members.

Not just because your own success depends on it. The motivation and success of everybody else on the team is influenced by how well you tackle those who oppose you.

The Cure: Mastery of the Leadership Deliverables

If you’ve ever experienced one or more of the above varieties of employee resistance, you know that it feels immensely annoying.

To overcome the challenge of leadership resistance among one or more team members, one thing comes first:  The employees need to see that your leadership is in their best interest.

To show employees how your leadership is in their best interest, you need a solid grip on the leadership deliverables!

The only leadership method, that teaches you leadership deliverables is Direct Leadership®

The reason it will help you overcome leadership resistance from your employees is that it makes your arguments crystal clear and directly linked to employee performance.

First, look at the right side of the figure below, where employee performance is subdivided into 7 categories: 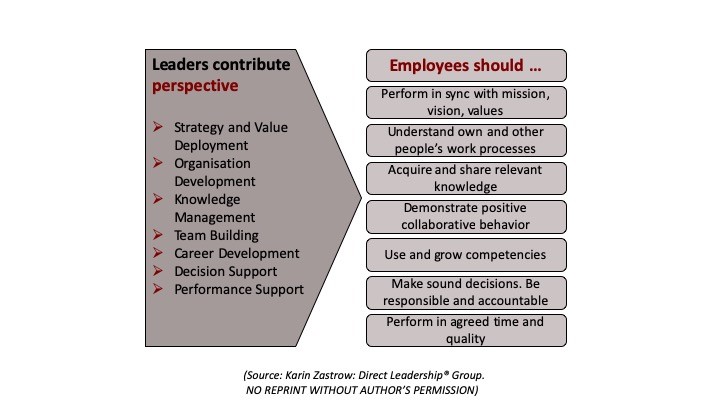 Then look at the left side, where you see 7 ways in which leaders must contribute perspective.

This means that when you intervene in a situation you can explain precisely how a particular employee behavior impacts their own or other people’s ability to perform according to these generic employee performance standards.

When you consistently argue and ask for what you want with this kind of clarity, few people will remain resistant to your leadership.

These 7 leadership perspectives are an essential part of the leadership deliverables taught in the Direct Leadership® method.

Learn the Direct Leadership® method and become an irresistible leader.

The online course Direct Leadership® - The Essential Leadership Deliverables is all you need to get started.

There are no comments yet. Be the first one to leave a comment!